After an awesome weekend out of town, which included driving through the fall colours, Montreal concert and late night bars/deli/bagels, family visits near Ottawa, and a wonderful wedding back in Quebec...back to reality!

This week has started *crunch time*, as I like to call it.  Finishing the organization of where our stuff is going, and beginning to get them to their new (temporary or permanent) homes. So far,  we've said goodbye to the 60" t.v, kinect, blu-ray player and sound system.  Although it's strange to see the big empty space on the wall, and getting use to going downstairs to watch on the 40" t.v (ohhh we're SO hard done by!), it's still rather liberating.  This weekend we have to clear out the drawers of all of our bedroom furniture, as they'll be going to their new temporary home the following weekend.  I have NO idea where I'm gonna put all my clothes.  Maybe "clean pile/dirty pile"?  It's a tried, tested and true organization method, right?  Though in Costa Rica, putting clothes in piles on the floor is a huge NO...unless you want to create awesome homes for scorpions, that is.  Like this little guy that I found at the bottom of my closet last time I was there: 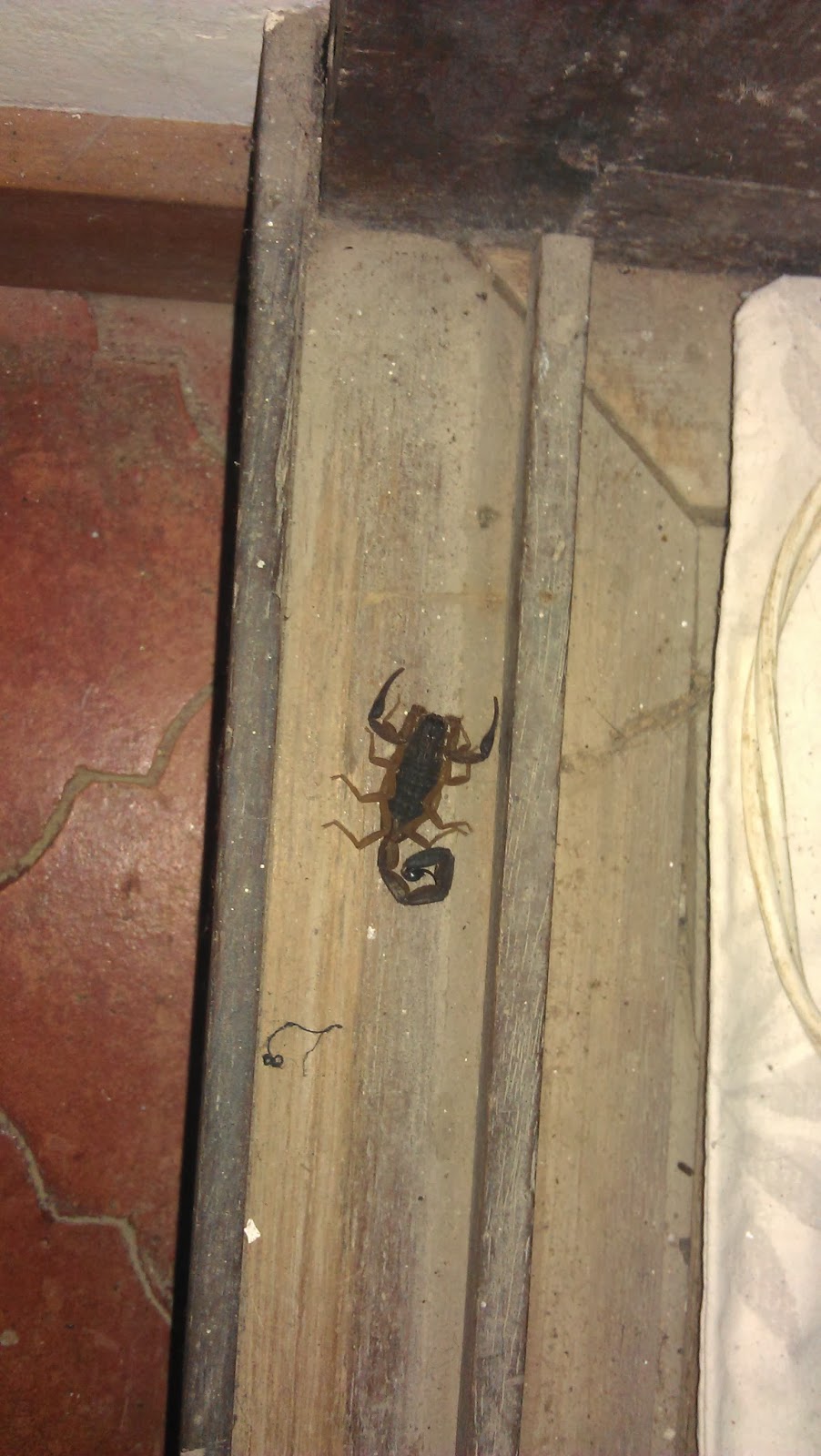 Honestly, I was there for 7 weeks and that was the only scorpion I saw (though I'm sure there were many lurking about!).  Knowing they're around kinda forces you to be neat and clean, which is pretty great.  Fear is sometimes a good motivator!

Then there's getting our cats over there, and all of those costs:(  I just booked their first vet appointments, which will be in a week or so.  For all four cats to have just the basics (exam and vaccines) it's going to cost about $500.  Has anyone seen that CBC Marketplace expose on vet costs?  Here it is: http://www.cbc.ca/marketplace/episodes/2013-2014/barking-mad  As a veterinary technician, who quit working in vet clinics a couple years ago for many reasons, I had a rebuttal that I posted on FB.  Though I don't disagree that services are overpriced, I also feel that most veterinarians need to educate their clients more effectively.  Also, as I said at the end of my rebuttal (which really says it all):

"One of the main reasons I quit working in vet clinics was because of the cost of services. Specifically, as a technician, it was my job to explain the procedure quotes to people and have them sign consent forms (god forbid the vets have anything to do with the money!). It stressed me out SO much, and broke my heart over and over every time a sick animal would leave without treatment because their owners couldn't afford payment. Sometimes I'd actually BEG them to do something, and BEG the clinic to allow a payment plan or reduce costs (which very seldom happened). I would come home depressed on almost a daily basis (ask Dan!) and my health was being affected.
That, combined with a serious lack of compensation or appreciation resulted in a decision to leave the one job that I was born to do: save animals.Bottom line: I get to do that job again soon, in an environment where costs are low, and as long as the donations are flowing in, I don't have to say NO to a sick animal."

I was really impressed by the vet care and quality of service, and the love/dedication of the local veterinarians in Costa Rica.  I wasn't sure how it would be, and caught a rare first glimpse on my first trip there last November when my friend (who founded NAC) met me in San Jose.  Here's an excerpt from my original post about the story:

"Wow so an evening of going to a friend's friend's house (in a suburb of San Jose) to make food for the vegan fest...turned into rescuing a doggy that got hit by motorbike! Sarah, aren't we on vacation? For animal rescuers, there is no such thing, really:p Found a clinic open late, no broken bones, some lacerations that were sutured and pain meds/ sedation administered. Took him back to the friend's house, and by 8pm, with the help of ppl in the neighbourhood, we found a new home for him:) Then, it was back to San Jose proper to do some bar-hopping with the local ppl:) What an adventurous first day here!"


That emergency vet visit cost $80, and part of the diagnosis process included x-rays and an ultrasound to check for internal bleeding.  Now, I understand that their economy is different than Canada's.  But if that situation had happened here, I'm sure the poor dog would have died on the street because honestly, who can afford the emergency vet clinic even for their own pets, let alone a homeless one?

Well, I should go back to sorting and organizing now.  I really can't believe how much STUFF we actually have!